I found this book at a used book sale and liked the simplicity of it and that it could be made in to an oral story.  The story is about a rabbit who sees an apple in a tree and wants it but can’t reach it.  A crow flies along to help but decides to keep it for himself.  He drops it as he flies away, the rabbit chases him.  It lands beside a hedgehog and he claims it as his.  They argue waking a bear who eventually helps them figure out how to share it. 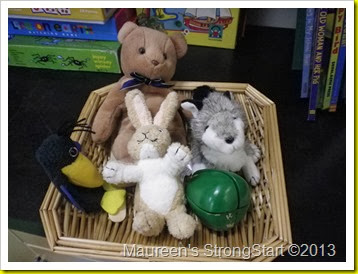 I decided to use props to tell the story but had to make a few substitutions.  My story is told with a pear (a Melissa and Doug toy) and a wolf instead of hedgehog.

The children liked this story and were able to predict what was going to happen.

Posted by StrongStart at 6:53 PM No comments: