Our district held Ready Set Learn events this week and last.
The three schools that I participate in held theirs yesterday and today. 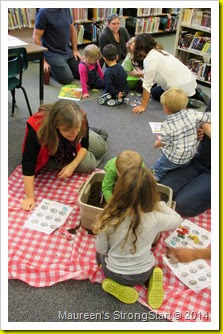 Ready Set Learn is an initiative by the Ministry of Education to support preschool children’s early learning by inviting them and their families into the schools.  The parents are their child’s first teacher and we wanted to provide simple activities for them to talk, read and play with their children to give them the best start on becoming successful learners. 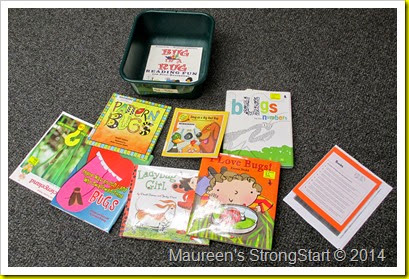 The focus of this event is on literacy and numeracy and this year we provide activities about bugs.  Every activity had bugs in it.  My role was to model reading, playing and talking with the children.  Encouraging the parents to do the same.  Building the children's vocabulary, expanding on their knowledge and having fun together. 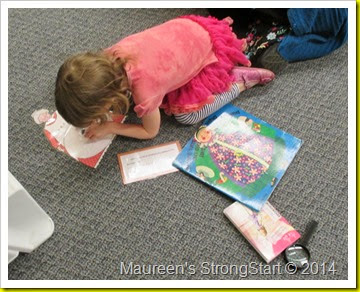 We started with the book “There was an Old Lady who Swallowed a Fly”.  As I read I encouraged the children to participate by making the sounds of some of the animals and having them guess which animal makes it.  Also encouraging them to remember the order of the animals in the story.  The children had the opportunity to retell the story using props.

The following are the centres that the families played together. 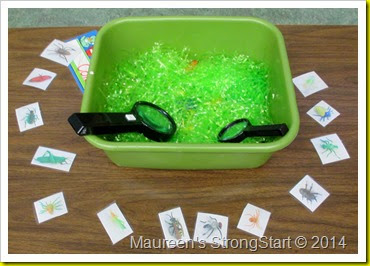 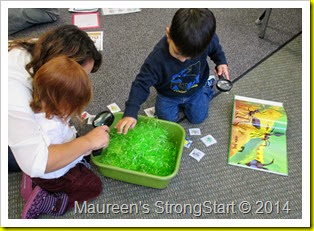 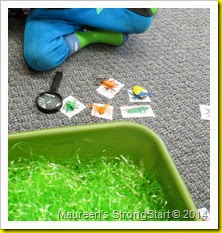 In the tall, tall grass was a tub full of Easter grass and bugs.
As they found a bug they matched it to it’s picture. 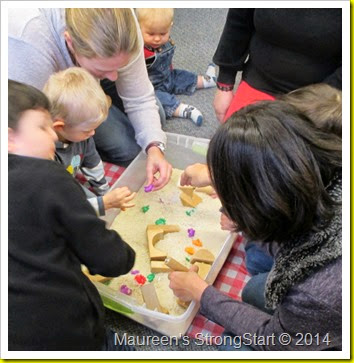 A tub of rice with coloured bugs with snap blocks to play.  The children loved the feel of the rice as they searched for the bugs.  They scooped it up and let it fall on the blocks and bugs. 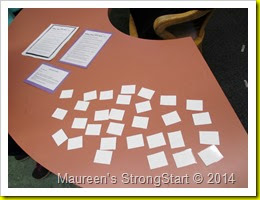 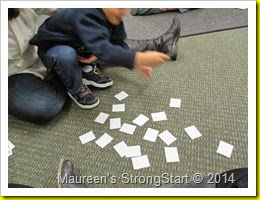 There was a memory game where they had to turn over and match two pictures.  This game provided an opportunity to practice taking turns and learning social skills.  Sorry I have no photos of the pictures. 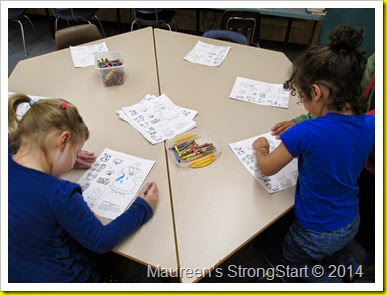 I also provided a sheet of all the characters in the story for the children to take home.  They could colour it, cut it apart and retell the story, practicing their memory skills. 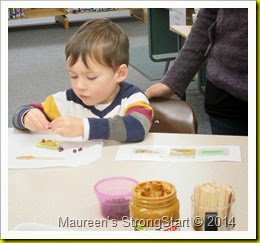 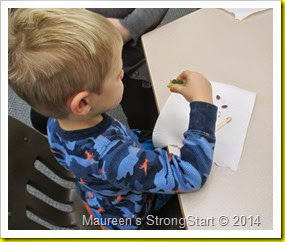 The snack was Bugs on a Log using celery, Wowbutter and raisins. I created a photo recipe encouraging the children to ‘read’ the recipe.  Explaining to the parents that this activity works on the foundation of reading.  Learning to scan left to right, going in order and telling what they see in the pictures. 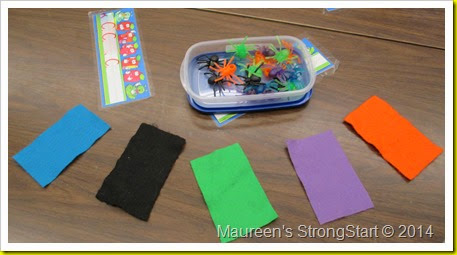 Another simple activity was a pile of coloured spiders with felt rectangles.  They matched colours and counted the spiders.

But the favourite centre, at all three events, was Digging for Bugs. 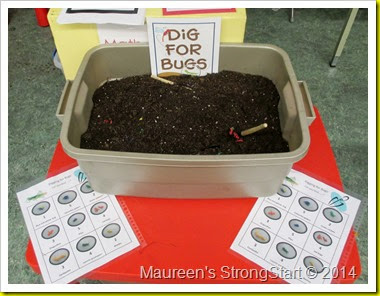 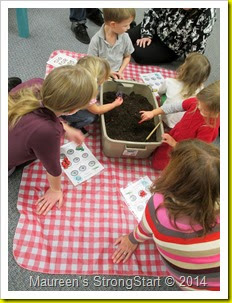 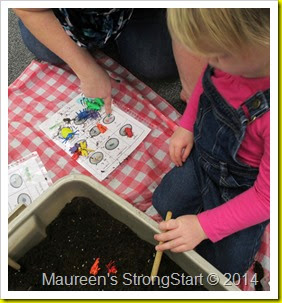 All the children spent time in the dirt.  Digging with their hands or the shovels.  A simple, inexpensive activity that worked on describing the bugs, categorizing and counting.  As well as talking about colours.  Some of the children stayed so long in this tub that they had dirt all up their arms, down their clothes and on their face.

We finished with a bug hunt.  Unfortunately I didn’t get any pictures but it is the same as a bear hunt but I had hidden bug stuffies around the room.  We used little magnifying glasses to look for them and after finding them we move liked the bug would.  The bee flew and buzzed.  The grasshopper hopped.  The butterfly fluttered gently.  And so on.

Posted by StrongStart at 8:27 PM No comments: