At our StrongStart centre story time always start with the families reading to their own children. Then I join them to start a group circle time. 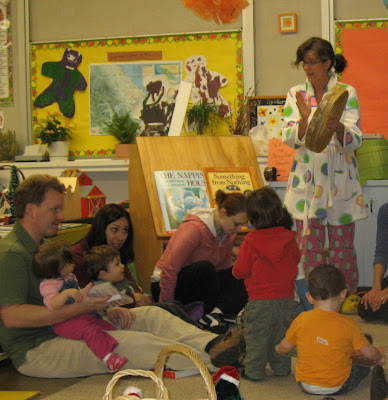 I use my hand drum and sing a song about putting their books away. The sound of the drum draws the children's attention instantly and they respond wonderfully.

This story time happened at one of our evening sessions (we offer one a month). The theme was pizza and pajama party. Thus the reason I'm wearing my pajamas.

Our hello and goodbye songs are always the same. I love watching even the youngest child learn the actions (which they do long before they say the words). Here are the words...
Hands go up, down
Turn around
Touch the sky
And touch the ground.
Wiggle your fingers
Wiggle your toes.
Wiggle your shoulders
And say Hello.

Hands go up, down
Turn around
Touch the sky
And touch the ground
Tickle your tummy
Blink your eyes
Blow a kiss
And say Goodbye.

I read Sandra Boynton's book Pajama Time. Well I tried to sing it and the children danced.

Then I told a story called "The Candle". 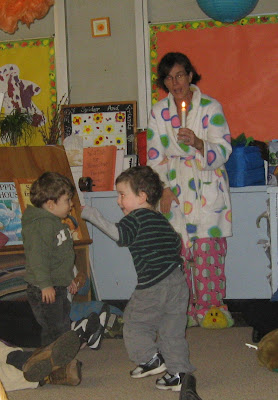 The interesting thing about telling a story are the children's possible reactions. This little guy wanted to blow the candle out for me.

Once upon a time there was a family that lived a long time ago. And in this family there was a mother, father, son, daughter and baby.

This family lived a long time ago before there was electricity. That means that they didn’t use stoves to cook their food, computers, tv, or even lights in their house.

The only way the little boy could blow was ‘up’ (mock blowing up through lips) No matter how hard he tried he could not blow that candle out.

So the mother said to her husband – dear you can blow the candle out – and the only way he could blow was out of the left side of his mouth – (mock blowing) No matter how hard he blew the candle did not go out.

Now they could not go to bed with the candle lit because it was too dangerous to have a fire lit all night.

Who do you think it is? Fireman – call him (Have families call ‘fireman’ several times) He came running up the stairs ‘yes yes can I help you’

Yes our candles burning and we can’t blow it out

He said I’d be happy to blow it out – and he went whoosh and the candle went out.

Then he said wait it’s too dark – I can’t see to get down the stairs. So they lit the candle again – held it out so he could find his way down the stairs

They heard some more footsteps outside

Who do you think it is? Cop?? Let’s call him

He came running up the stairs. And said what’s the problem? he said

We can’t blow this candle out

Oh I’d be happy to help and he blew – whoosh – wait it’s too dark, it’ way too dark. I can’t see to get down the stairs. So they lit the candle again – showed him the way down the stairs

They there were with the candle lit again

They didn’t know what to do. They were getting very tired of standing at the top of the stairs - everybody wanted to go to bed

Now do you remember that there was another child in the family? That’s right – the baby. The baby had crawled up the stairs behind everyone. Pulling on his fathers pant leg saying “I can do it” (whisper). Pulling on his mother’s gown saying “I can do it”(louder). But they said ‘you’re too little, you’re too little – we’ll figure this out. But he said “I’ll help, I’ll help’

And they put the candle down in front of him

And blew out the candle

And that’s the end of that story.

Posted by StrongStart at 8:23 PM No comments: