During November families were talking about count down calendars
so it got me looking on Pinterest for different ideas and I found one
that intrigued me. 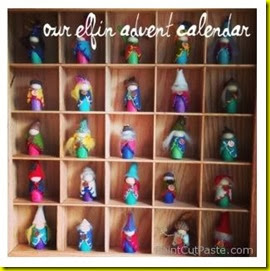 Paintcutpaste’s elfin advent calendar was the motivation for our
Pegkin Project.

I started by asking families to take a plain wooden peg doll home
and create whatever they wished, fairy, elf, fire fighter, whatever
their creative minds could come up with.  Then I asked them to
chose a day in December to deliver it back to school.

The month quickly filled up and we are now enjoying meeting our
new Pegkins.  By December 20th, the last day of school before
Christmas break, we will have 25 new peg dolls to play with.

Here are six that arrived this week.
Each comes with a little introduction that the children told me. 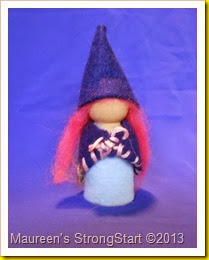 Pegkin #1 Bluesy Twosy – she likes everything blue like blueberries,
blue bells and blue butterflies and she likes things to come in twos so
she can share with a friend. 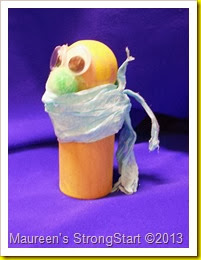 Pegkin #2 Auntie Nancie - she is from Vancouver and likes to visit
grandma's house. She wears a scarf so she can play at the park.

Pegkin #3 Ella - she likes to play Hide and Seek with cats especially
Tibby the cat. Ella lives in the dirt in the garden with worms.

Pegkin #4 Claude - no it's not Santa Claus but a relative. His name is
Claude and he does live at the North Pole and his job is to read Santa's
letters and he likes to write. 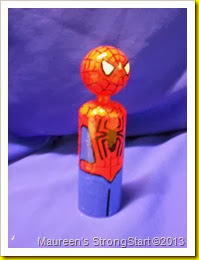 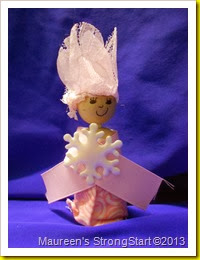 Pegkin #7 Snowflake - she lives in the snow and plays with other
fairies like Tinkerbell. Their favourite game is Hide and Seek.

Pegkin #6 had to stay home because the school was closed for a snow day,
we’ll meet him or her next week.

Meanwhile the new Pegkins have been getting comfortable in their new home. 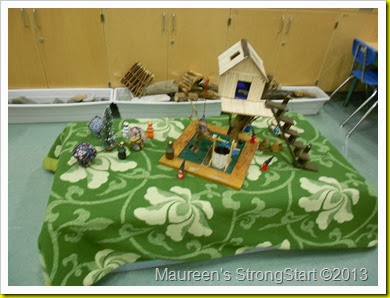 Last year the grade 5 class in our school did a pulley & lever project which we went to look at.  I was very impressed with all of the buildings that they had created and asked what they would do with them after they were graded.  Most we taking them home but some were going to throw theirs out so instead they donated them to StrongStart.  And that is how we ended up with this beautiful tree house. 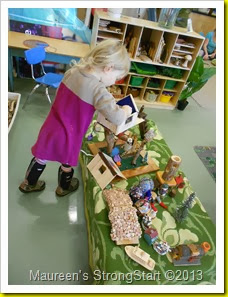 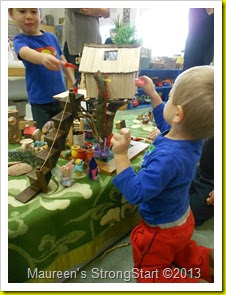 The Pegkin Tree house is a very busy area.  Children, regardless if they are a boy
or girl, are attracted to this area. 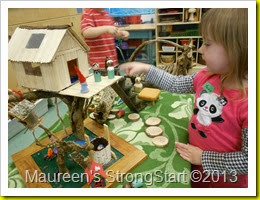 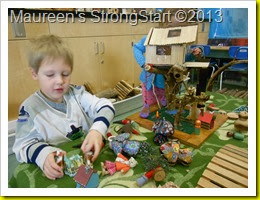 Is it the imaginary aspect?  Is it the small scale?  Or is it that it’s not decorated in any stereotyped pink or blue theme?  Whatever it is, it is a place to sit and enjoy the creating.