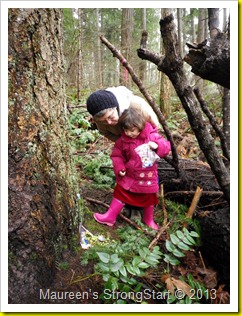 I've been wondering "sometime in the future will the children
remember Fairy Lane".  "Will something make them recall the feelings
they felt when they were walking through the woods?"

In the four months that Fairy Land has existed I have reflected on why my own
feelings are so strong.  Little pieces of memories have come back to me.
Such as when I was little my family would watch the Irish Rovers tv comedy
show and the 3 little leprechauns that would appear in the pop up book.
Or that I enjoyed playing with any doll that would fit into the palm of my hand.
Or wander the fields and woods that made up our farm. As well as creating
dolls from the silk and husks off fresh cobs of corn.

Also after having my own family, we ventured here to the island and walked
through Cathedral Grove, for the first time, with it’s magnificent trees and
enjoying stories of trolls. 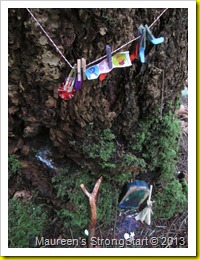 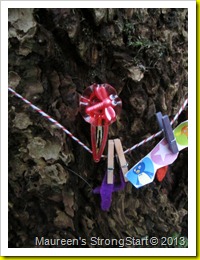 My hopes when Fairy Lane was created was for families to explore the woods and
feel the magic of nature.  And wonder, could creatures (fairies, elves, trolls, pixies)
live here other then the ones we see and know, deer, birds, cougars, rabbits? 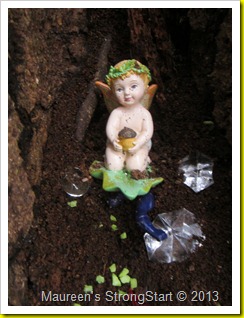 I wondered “how can we explore nature and leave a message that we appreciate
it?”  Families are doing that.
I hear accounts from people who have discovered Fairy Lane and the reaction
from the children.  One little girl that lives close to the Lane visits quite often
with her brother, mom and dad.
During the Christmas holidays when family was visiting from out of town that
is what she wanted to share.  So off she went sharing with her parents,
grandparents, aunts, uncles and cousins the joy and excitement she feels when
she visits our little doors. 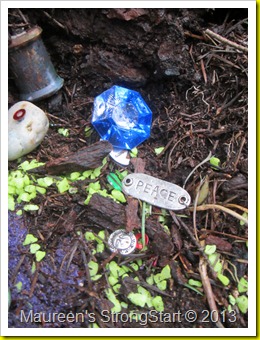 I see, when I walk through Fairy Lane, evidence through the treasures they leave
behind showing pleasure from children and maybe grown ups too.

I receive emails from families of how they have connected what they see at
Fairy Lane to what is happening in their day to day life. 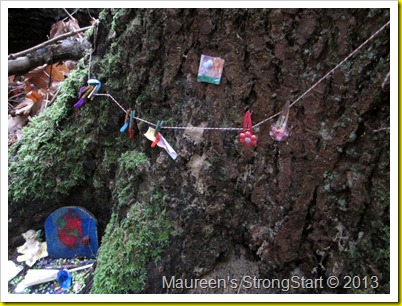