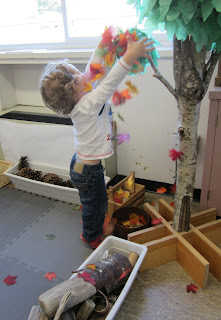 I added a basket of silk like leaves to our nature inspired play area.
I picked one handful and set it on the lowest branch.
One little boy saw me and added one handful of leaves.
As the branch became full the leaves would fall down.
The little boy picked up two handfuls and put them on the branch.
With a smile on his face he watched the leaves float down.
Then he scooped up an armful and tried to put them on the branch.
But they would flutter down quickly.
By the big smile on his face I could tell it didn't matter.
He continued until the basket was empty. 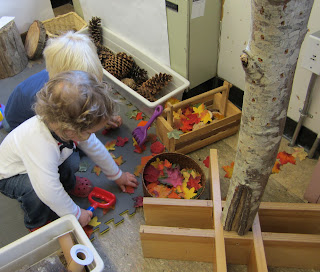 "How do we clean up leaves?", was a question asked.
Rakes!  We went to a storage box with outside toys in it.
Found two rakes and went back to work.
I call it work but as you see another boy soon joined in
on the play. 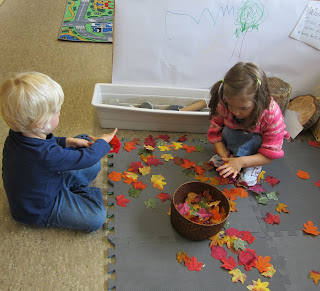 The play continued on with other children in other ways.
Posted by StrongStart at 4:31 PM No comments: