We have a lot of rabbits living in our school yard.  Whenever we are out to play or go for a walk in the woods we see them out on the grass.  But where do they live?  Especially in the winter time.

This is the beginning of our first project for 2016. 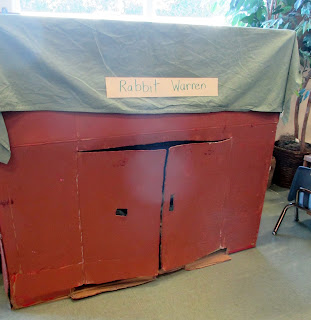 Rather then removing the big cardboard box from our room I renamed it a Rabbit Warren.  Inside there lots of rabbit stuffies.

Today one little boy spent most of his time in the warren with his mom. 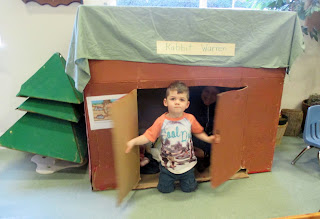 Every once in a while he would pop out and ask me a question.  “Maureen can I stay in here and sleep?”  I responded, “Sure could you use some fabric to wrap up in?  On a near by table I had placed large pieces of fabric and he took one in to the box. 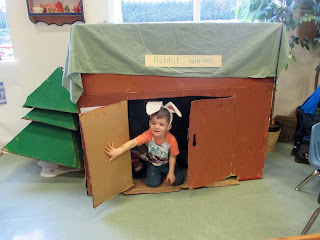 A little while later I heard my name being called, “Maureen we’re rabbits!”  I offered him some ears to wear. 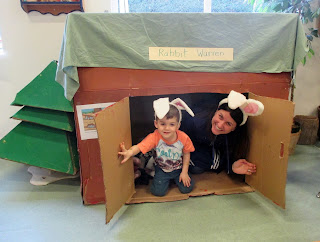 His mom encouraged his imagination and participated in the role play that he was developing. 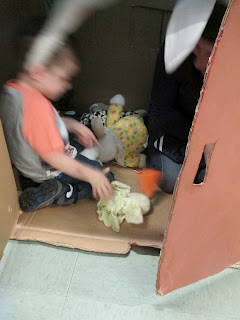 A little while later, from across the room, I heard, “Maureen do you have any carrots?”  I suggested he check in our play kitchen.  He found carrots and lettuce. 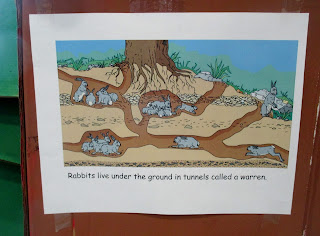 Next week we’ll add some tunnels to the warren.

Posted by StrongStart at 9:06 PM No comments: