Fun with Our Grandfriends

During our visit with grandfriends this morning I heard these comments from the seniors. “This has been the most fun morning I’ve had.”  “I haven’t giggled this much in years.” 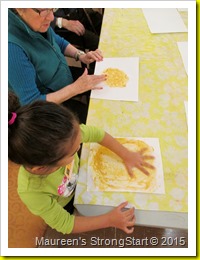 This morning we tried finger painting with our grand friends but we didn’t use paint.  We mixed up a box of caramel pudding and gave each person a big spoonful.  The grandfriends looked at it and said “what do we do with it?” 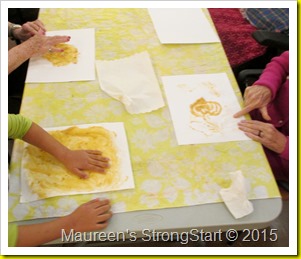 It took a few minutes for them to touch it.  One little girl was enthusiastic and inspired the grandfriend beside her to try it.  That’s when the laughing started. 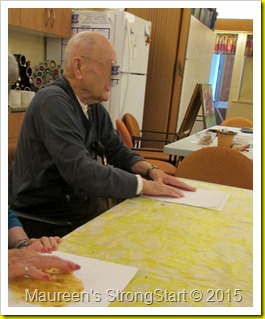 The gentleman at the table, when asked if he wanted to finger paint, said he doesn’t like his hands being sticky.  When we checked back with him he had cleverly put a second piece of paper on top of his and was squishing it together. 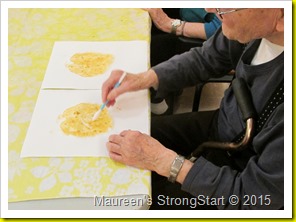 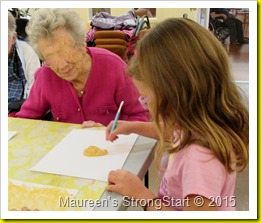 I brought some tools to the table to use instead of their hands.  I encouraged them to talk about what their painting looked like.  His looked like the sun or when I said it looked like a lion he was quite impressed and laughed.

From there the fun continued. 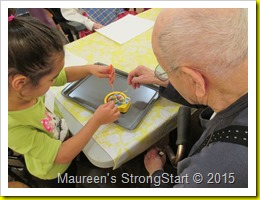 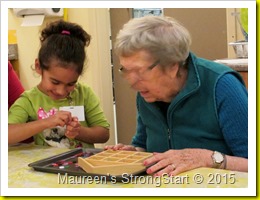 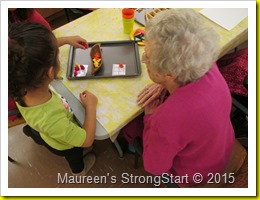 We brought over some play trays.  The seniors are very expressive with the children telling them what they see happening.  That motivates the children to show their grandfriend more. 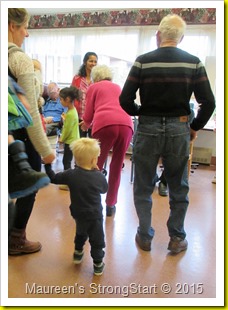 This week we visited the extended care wing and met new grandfriends.  We sang songs and moved our bodies and we played with the parachute meant more laughter. 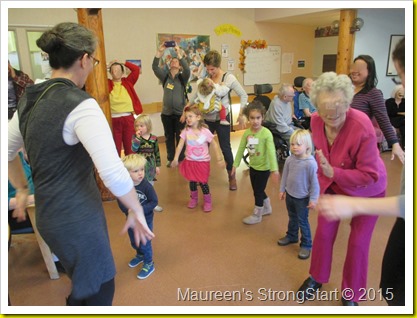 We showed them our song “Knife, Fork, Spoon, Spatula – Cha Cha Cha”  and some of the grandfriends really enjoyed to cha cha. 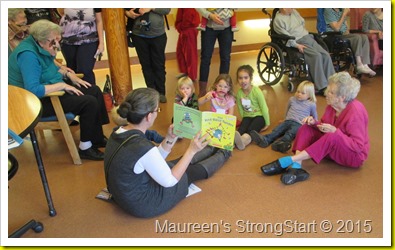 It surprised all of us when this grandfriend sat down on the floor for story time but she was just that involved with the children that she followed what they were doing. 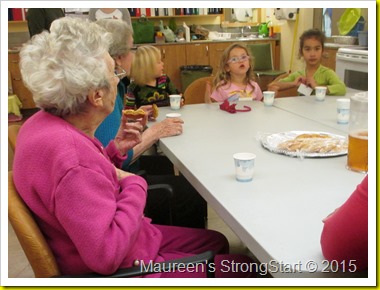 Normally after songs and story we say bye and head back to the activity room for our snack but today these two grand friends didn’t want their time together to end and joined us.  As they sat and shared cookies and juice I heard one of them say “I’ve never had a friend this young.  It’s quite lovely.” 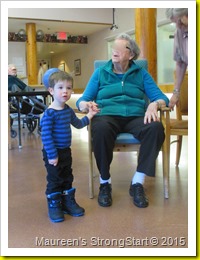 A fabulous morning sharing simple activities but bringing much joy and laughter
among the generations.  We are so lucky to have special friends.

Posted by StrongStart at 8:21 PM No comments: