My Country – Our Canada

Today is July 1st which is a day to celebrate this wonderful country we live in. 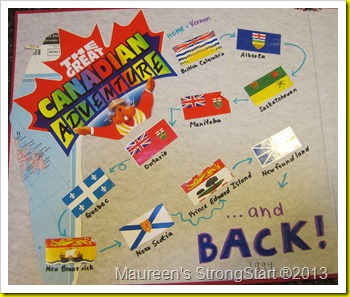 I’d like to take you on a tour of Canada that we took way back in the summer of 1999.  The following are photos from the scrapbook that my family created while on the trip. 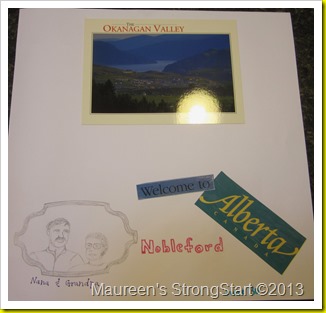 At the time we lived in the Okanagan in central British Columbia.  First stop was at my parent’s home in Nobleford, Alberta, a couple hours drive south of Calgary.  We were just getting in the groove of making the scrapbook and forgot to take a picture of my mom and dad, so my daughter drew them. 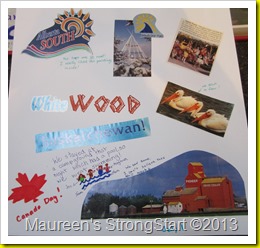 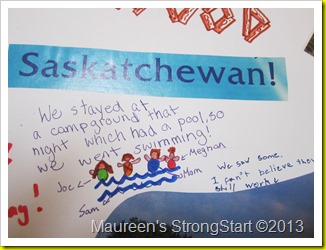 July 1st we spent in Saskatchewan, admiring the grain elevators, massive teepees
and, believe it or not, pelicans. 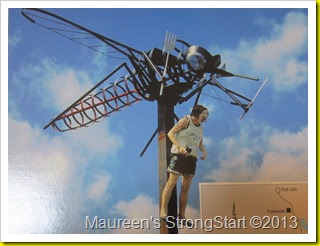 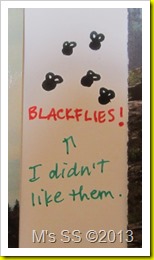 For some reason we don’t have any photos of Manitoba.  I don’t think we worked on the scrapbook in the evenings because the mosquitoes were so bad. 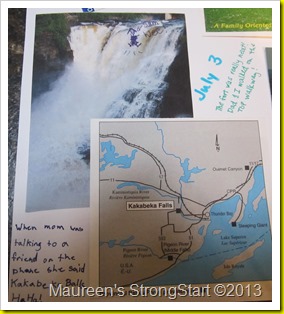 Once we were into Ontario, the province that we are from and spent most of our lives till that point, we started to show our daughters some of our favourite spots.  This one is Kakabeka Falls almost to Thunder Bay where we lived for our university and college years. 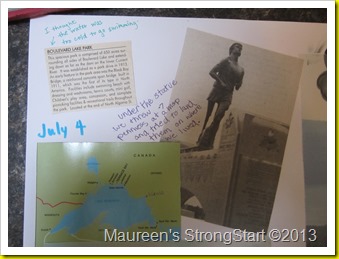 South of Thunder Bay we stopped at the Terry Fox memorial statue overlooking Lake Superior and the Sleeping Giant. 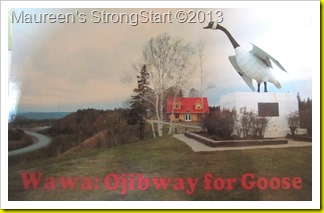 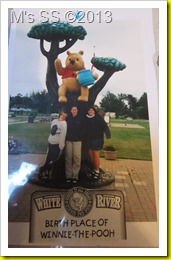 We took in many of the tourist sites along the way. 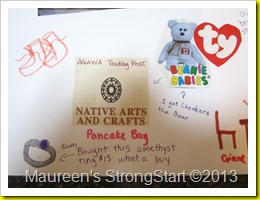 As well as places the girls remembered and wanted to create new memories. 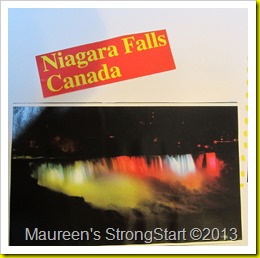 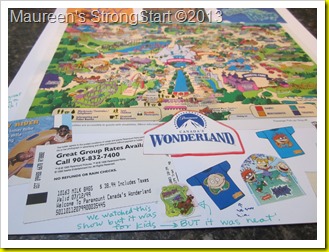 In southern Ontario we stopped in Niagara Falls, my birth place.  Then Canada’s Wonderland which could be called a Disney of the North. 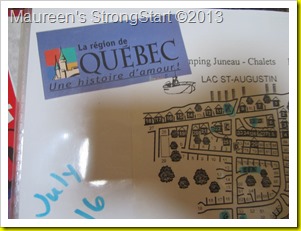 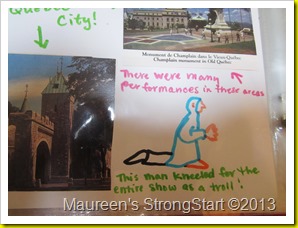 From Ontario we drove on to Quebec and enjoyed watching street performers as we toured beautiful Quebec City.  The city is old compared to western cities.  Another difference is the amount of brick used in the buildings.  Western Canada naturally used more timber to build. 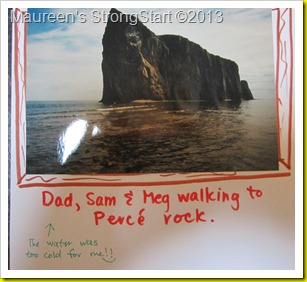 My favourite part of the trip was visiting Gaspe.  When I was a child my family rented a motorhome and took us to the east coast.  The memory of Perce rock in Gaspe has always stayed with me.  I think because it was my first experience with tides.  Or it could be the friendly atmosphere of this small community. 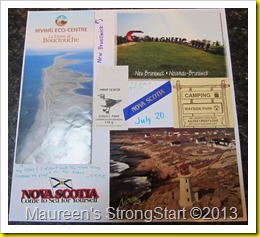 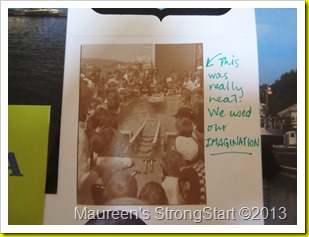 On to Nova Scotia, so friendly, so full of culture from the fishing industry to the home of Alexander Graham Bell.  I love the note my daughter wrote beside the photo of learning how to launch a new ship, ‘we used our IMAGINATION’. 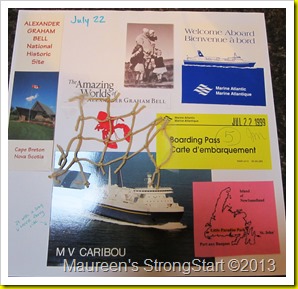 From Nova Scotia we took the ferry to Newfoundland.  There are two routes you can go; a 6 hour ferry to Port Aux Basques or about 13 hours to St. John’s.  When planning the trip, way west in B.C. we opted to go the shorter route.  Next time we’ll definitely have to go to St.John’s. 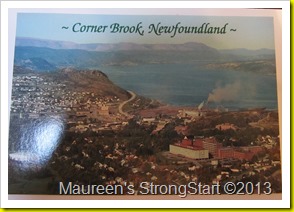 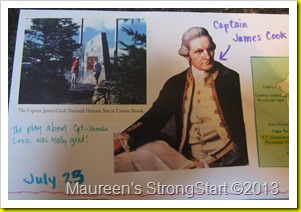 Up the west coast of Newfoundland we stopped in Corner Brook and learned about Captain James Cook and his discovery of the new found land. 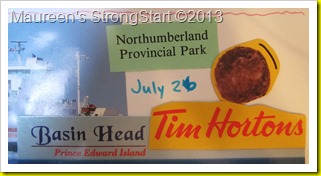 Tim Hortons is a Canadian treasure and in the eastern part of Canada you’ll find one at almost every corner.  We stopped at many of them. 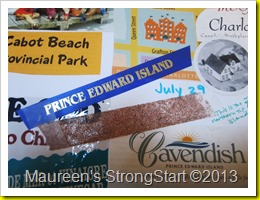 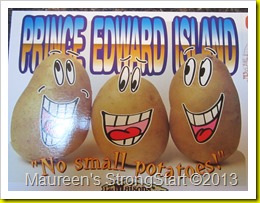 Back to Nova Scotia, a drive around Cape Breton took us to the ferry to Prince Edward Island.  The sand on PEI is red, we took a piece of scotch tape and pressed it into the sand then stuck it in our scrapbook.  PEI is home to Anne of Green Gables and a potato museum.  I picked up a few recipes there, my favourite is potato candy. 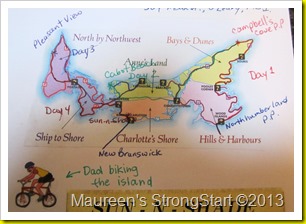 My husband took the opportunity to cycle around the island while the girls and I did all the tourist stops.  We also visited light houses, glass bottle house, and beaches. 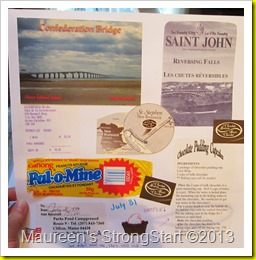 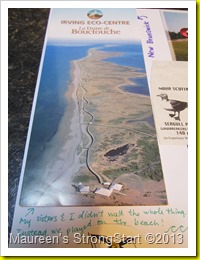 Leaving PEI we took, the then new, Confederation Bridge.  The bridge is over 12,000 meters long and takes about 12 minutes to cross to arrive in New Brunswick.  We discovered a chocolate factory and a beautiful beach called La Dune de Bouctouche. 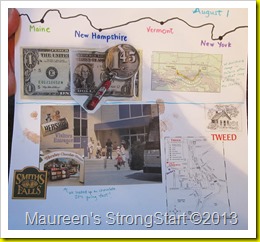 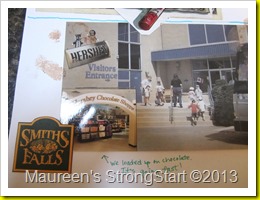 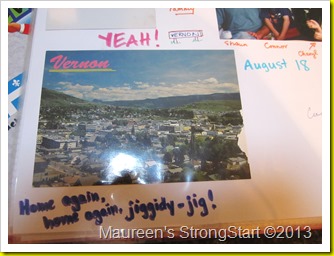 It helped us make the long but quick trip back to British Columbia.
If you live in Canada, where?  If you traveled to Canada before, what part?
It’s a big country with lots to see and very worth a trip.
Posted by StrongStart at 10:21 PM 1 comment: