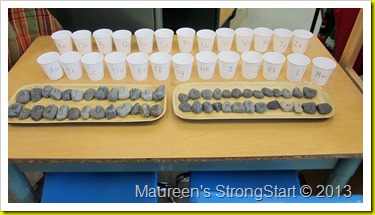 I’ve noticed that many of the children love rocks.  They pick them up on their walks, they fill their buckets when they are at the beach and often they’ll arrive at school to show me a rock they have in their pocket. 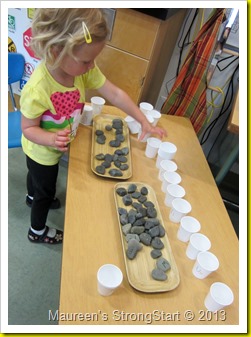 One day when I was at the beach I collected rocks and decided to make
ABC rocks. 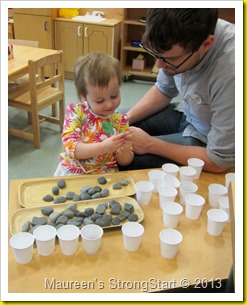 Each letter of the alphabet has two rocks; one for the upper case letter
and the other for the lower case. 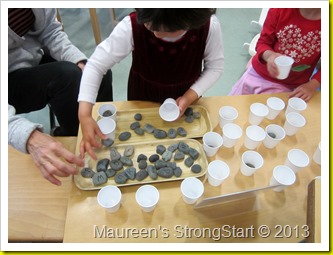 The little white cups have the same letters printed on them.  They can drop the two matching rocks into their cup. As the children played with the rocks they didn’t always put the rocks into the cups.  They enjoyed moving the rocks around, feeling them and turning them over.  Carefully exploring each rock.

Sometimes they would ignore the rocks and simply stack the cups within each other.  I noticed this same thing after they finish their snack.  They like to stack their drinking cups as high as it will go.

Hmmm, I’ll have to put just cups on another table and see what they’ll do with them.

Posted by StrongStart at 8:29 AM 4 comments: