Today we went on a bird walk at Lazo Marsh.  It was a small group that
ventured out but we had so many birds welcome us. 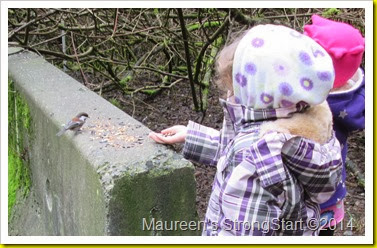 When we got out of our cars the chickadees were waiting to be fed, well
that’s what it felt like. 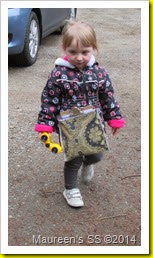 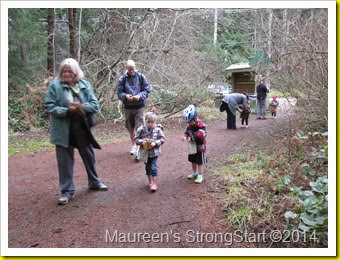 Off we set with our nature bags full of bird feed 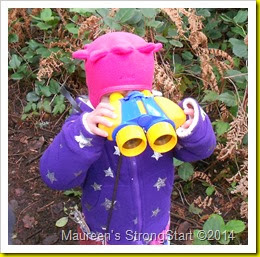 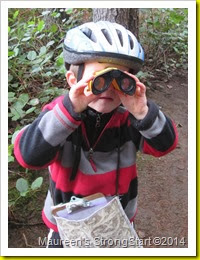 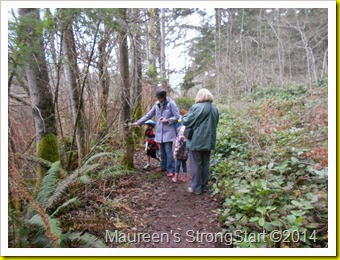 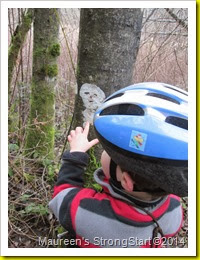 The first thing we spotted wasn’t a bird but moss on a tree that looked like
a face. 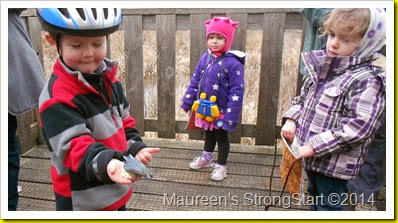 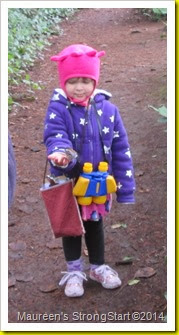 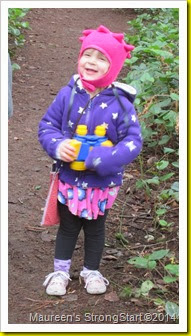 How exciting to have the birds eat right out of our hands.
It kind of made us hungry. 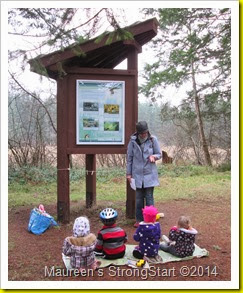 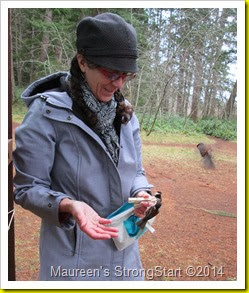 Time for a snack and story.
As I was getting started the birds landed on my hands looking for food.
But when they realized there was no seed they flew off. 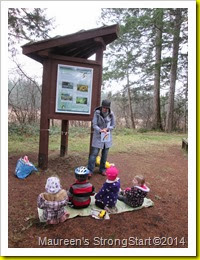 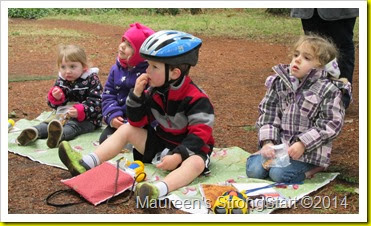 I told a 'clothesline' story.  It's called “Owl Feathers”.
As you tell the story you hang the pictures on a clothesline.

Here are the pictures I used. 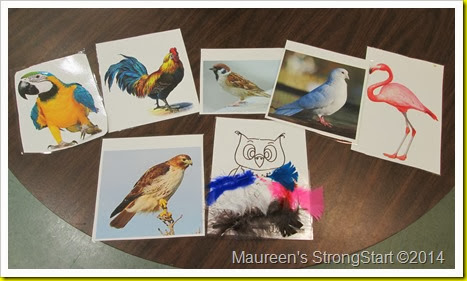 Here is the story.
Owl Feathers
A long time ago animals used to give parties and balls, just as people do. One day the birds decided to have a ball. Birds from everywhere in the world were invited to come, wearing their finest feathers. Hawk was in charge of delivering the invitations, for in those days he was the most polite bird in the world.
Hawk set off around the world and delivered each invitation personally. He invited the dove and the flamingo, the rooster and the sparrow, the duck and the parrot. He invited big birds and small birds, chattering birds and birds with beautiful songs , birds with bright feathers and birds that were gray and brown.
When Hawk came to Owl’s house, he gave him the invitation to the ball, as he had the other birds.
Owl read it and then said sadly “I cannot come”
“Why not?” asked Hawk
“Well, just look at me” said Owl, “Don’t you see that I have nothing to wear?”
Hawk looked at him and noticed that owl was completely naked. He had no feathers at all on his body, not a single one. He was quite dismal-looking, in fact.
Hawk felt sorry for Owl and said “Don’t worry. I will talk with my friends, and we’ll see what we can do to get you something to wear to the ball.”
Hawk told the other birds that Owl couldn’t come to the ball because he had nothing to wear. “I will lend him one of my feathers” said the Dove, who was very kind.
“I will lend him one of mine” said the Duck
“And I will lend him one of my shiny ones” said the Rooster
Soon all the birds had promised to lend Owl feathers to wear to the ball. On the day of the ball Hawk carried the feathers to Owl’s house.
When Owl saw all the many beautiful feathers Hawk had brought him, he said, “How can I ever thank you, my friend?’
“Don’t thank me” said Hawk “Thank my friends the other birds instead”
But Owl paid no attention to him. He was too busy dressing up in the feathers and admiring his reflection in the lake.
Hawk said good-bye to Owl “See you at the ball” Hawk said “And by the way, don’t forget, my friends are only lending you their feathers. They’re not giving them to you to keep. You have to give each feather back to its owner as soon as the ball is over. Don’t forget”
Owl promised Hawk he would do that. But when the night of the ball arrived, he could hardly enjoy the dancing. All he could think about was that he had to return the beautiful feathers he was wearing. And he didn’t want to.
None of the dancers noticed when Owl left the ball. He hid the forest, in a dark hole in a tree where none of the other birds could find him.
The next morning the birds went looking for Owl. They called, “Owl, where are you? Give us back the feathers you borrowed from us.”
But no matter how loudly they called, Owl didn’t answer. At last all the birds had to go back to wherever they belonged without the fine feathers they had loaned to Owl, and each one of them was very angry at him for breaking his promise.
From that time to this, birds still spend part of every day looking for Owl. That’s why Owl never comes out in the daytime. He stays hidden in his dark hole in the tree until it is night, when the other birds are asleep.
And late at night he comes our and dances all alone. He looks very handsome in his fine feathers, but only the moon and the stars can see him.

Posted by StrongStart at 8:26 PM No comments: