Using Recyclables at the Easel 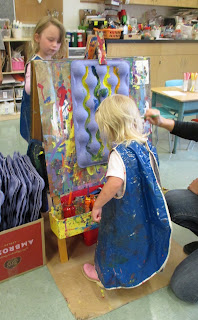 I've been trying to clear out my storage room knowing that I'll have more donations coming in this year.  So what to do with a box of dividers from apples?
Why not put them at the easel to paint on instead of paper. 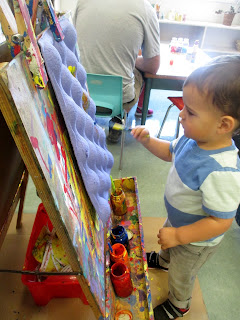 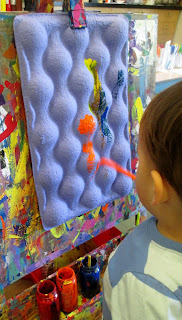 Some children were a bit unsure and refused to paint on it.
Others who were unsure gave it a try.  At first making small strokes or dabbing the paint here and there. Or using the brush to push the bubbly part flat. 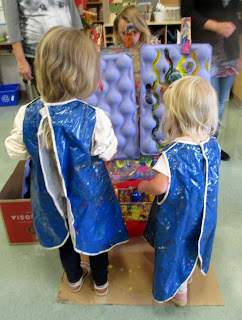 Other children were very intrigued and couldn't wait to paint on it so they buddied up. 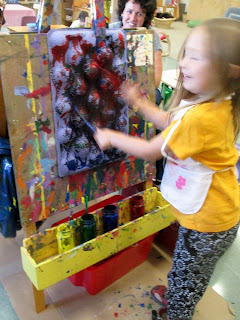 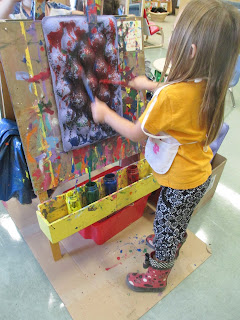 And a couple showed quite the enthusiasm with having a new way to express themselves.  Almost like Jackson Pollock (I had a little floor clean up after). 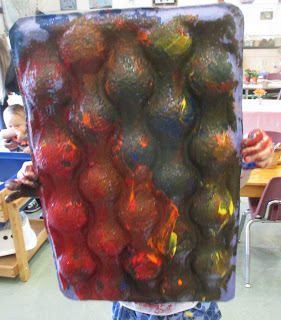 I heard some of them telling their parents that they were making new colours.  I noticed that some had one or two strokes of paint and then stopped, while others, like the one here, was covered.  What I noticed the most is that it slowed most of the children's process. As they pulled the brush down the bubbled cardboard it swayed from side to side instead of the smooth motion they were use to.
I wonder what else we could find to paint on.  Any suggestions?

Posted by StrongStart at 6:38 PM 2 comments: