This is the first time I’ve told a story with the overhead projector.
I was inspired by a post about a family fun Spooky Stories over at Creative Family Fun. 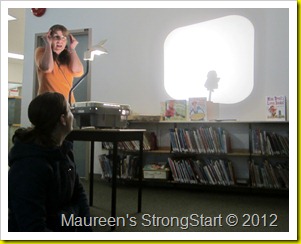 They suggested the book The Teeny Tiny Woman and I happen to have a copy. 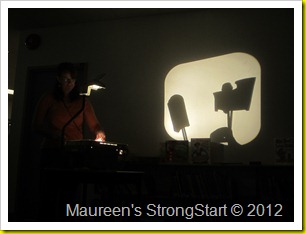 I copied the images from the book and mounted them on black paper
then attached long wooden sticks to the backs.
Except for the gate which was made from mini popsicle sticks. 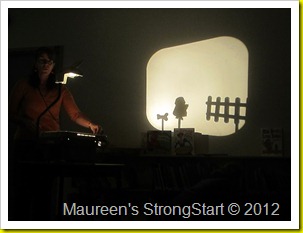 On Tuesdays our story time is in the library
so I already had the overhead projector set and ready to go.
It’s not a long story but very easy to learn.

After story time I brought the projector back down to the room
and set it up in our story area so the children could use it. 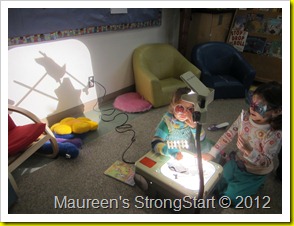 A small group of children picked up the shadow puppets and
began to retell the story.
These girls retold the story fairly true to what I told.
But then they became creative - I love how their storytelling became musical
and how they worked together.
This last video shows a boy, 4 3/4 years old, join in and using the book to try
to retell the story.
He is recognizing patterns in the words and realizes that when the girl says the
same word over and over that it doesn't match the print.
He is understanding some rules in regards to reading;
capitals, long and short vowels, reading from left to right are a few.

I'm so excited to be able to have a parent willing to videotape
and squeeze the time to sit and record some of it myself.

The videos have been wonderful to watch after a very busy and productive day.

Posted by StrongStart at 7:48 PM 3 comments: