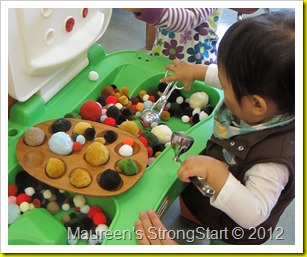 For the past couple of weeks the children have been exploring
pom poms with scoops and tongs. 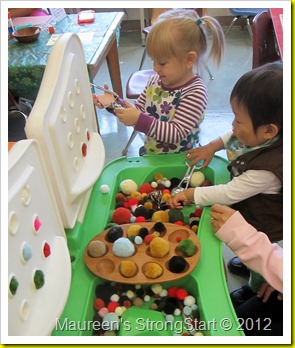 The table is a Little Tike’s Sand and Water table
that I found at a kid’s consignment store.
I’ve yet to use it for that purpose. 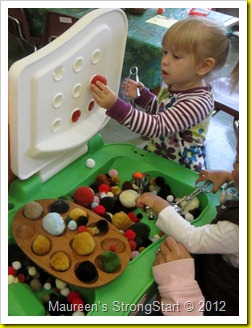 Notice the holes in the white lid, I’ve learned tonight
that there should be gears and gadgets to attach but
didn’t come with my table.

The children discovered a use for them – stuff the pom poms in to holes. 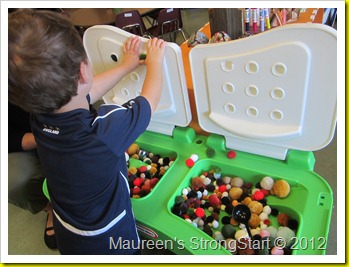 But not all pom poms would fit.

“Why do you think some fit and some don’t?” I asked.
The first answer was '”they’re too big” but as we experimented
we noticed that some big ones could be squeezed in the little holes
while others just couldn’t.

“What do you think is different from this large pom pom and this large one?” 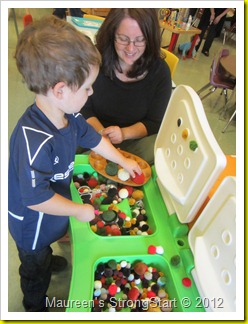 As he continued to try the different pom poms,
he began to notice that some big ones were soft and could be squished.
The pom poms that were big that wouldn’t fit felt harder. 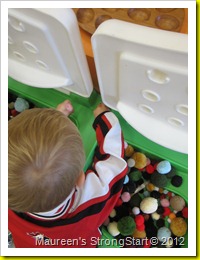 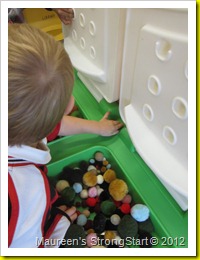 Then yesterday I noticed this little guy pushing the pom poms
in a hole in the middle of the table.
They would disappear.

“Oh, Oh”  I said “where do they go?”
The tone of surprise in my voice got him interested. 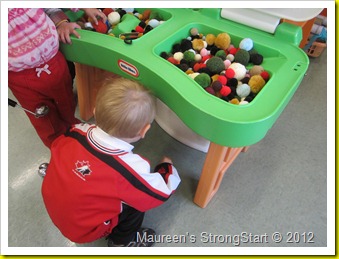 He soon discovered they were on the floor under the table.
It took him a few more tries to make the connection of them
going through the hole and coming out underneath.

By the big pile on the floor, I discovered that he, obviously, wasn’t the first to do this.

Posted by StrongStart at 9:44 AM